I was previously using the Creality firmware before upgrading to the 7/6 Ender 3 - v4.2.7 Board - BLTouch with no heating issues. I’ve done the onboard PID tune several times but I am getting a string of “Heating Failed, Please Reset” errors when attempting to print. Any idea what’s wrong? It seems that once it heats fully once it will work again until the machine is reset. Once reset the heating errors return until a successful heat then I can print back to back again.

Reset your EEPROM to factory defaults, save the defaults to the EEPROM and restart your printer.

Set it up again, and you should be able to save your preferences without issue.

The new PID values set correctly after the tune but the “cold start” heating failed issue remains. Do you still suggest doing a EEPROM reset?

Yes. Likely something stored in the EEPROM structure is incompatible between major versions of Marlin.

This appears to have fixed the issue, 3x cold start heat cycles and no errors. Thank you for your work and assistance.

Unfortunately this morning heating errors are happening again. It gets within 7-8deg of the target temperate then drops back 5-6deg then when its heating back up it throws the error.

Here are some more values that might help diagnose this as it seems like its the PID values are not working as intended.

To me it seems like the PID settings are not applying enough power towards the end of the heating cycle and reducing temp too early then throwing an error too quickly.

Also a related observation, once there is a successful heat up I do not experience any further errors until the machine is turned off and back on. I have better luck using the Preheat PLA End than I do kicking off a print job for heating successfully, both set to 200 print temp. This is happening on two separate Ender 3 Pros with upgraded 4.2.7 mainboards.

I don’t know enough about PID or firmware to correct any of these observations but maybe it will help understanding what is happening.

This Marlin bug report seems to describe the same issue I am experiencing:

### Did you test the latest `bugfix-2.0.x` code? Yes, and the problem still e…xists. ### Bug Description This bug is present in the CR6-SE Community Firmware at Release 6, which incorporates Marlin bugfix2.0. I am running this particular version, compiled for my printer's hardware configuration: [CF6.1-Pre2-btt-skr-cr6-with-stock-creality-tft-2021-04-18-22-12.zip](https://github.com/CR6Community/Marlin/releases/download/v2.0.7.3-cr6-community-release-6.1-pre2/CF6.1-Pre2-btt-skr-cr6-with-stock-creality-tft-2021-04-18-22-12.zip) I reported this bug on the Community Firmware GitHub [Issue#248](https://github.com/CR6Community/Marlin/issues/248), but the CF6 developer has asked me to report it upstream, here. Description: The nozzle temperature sometimes fails to reach the target value when heating. When this is happening, the temperature may climb to within a few degrees of target, but then drops again, cycling around a center value approximately 10 degrees below target. Eventually, the system throws a "Heating Failed failed to achieve target temperature within the alloted timeframe" message on the screen and "kills" the job, forcing the user to cycle power to recover. ![wtf](https://user-images.githubusercontent.com/36551518/115184745-7a345080-a0ac-11eb-977b-138fb17844e2.png) [wtf.txt](https://github.com/MarlinFirmware/Marlin/files/6333392/wtf.txt) ### Bug Timeline Issues with PID not performing as well as in the past have been reported by several users since Release 6 of the Community Firmware. ### Expected behavior Nozzle should heat to the target temperature and stabilize. Particularly if the system has just had a PID run (M303 E0 Sxxx U1) at the same target temperature with no problem, yet now can not heat to that xxx temperature to print. ### Actual behavior When this problem occurs, the serial interface shows that the printer recognizes the correct target temperature, yet it stops short of heating to that value, cycling instead around a value about 10 deg C lower than the target. NOTE: [These users on the Creality CR6SE/MAX Official Facebook Group describe this same problem](https://www.facebook.com/groups/CR6SECR6MAX/permalink/762752264442045/) in other scenarios, so it is not specifically or uniquely an issue when heating to 235C or when running an esteps extrusion. I have also been able to successfully achieve 230C when I could not achieve 235C and I have achieved 235C when the nozzle was already at 230C, so there are other parameters at play, here, that I have not yet isolated. The part cooling fan was off, the whole time. In the final cycle of the second graph (see my comment below this post), the printer actually bumped-up from 230 to 235 just at the end, there. No idea why, as you can see it was settling at the lower value & I touched nothing. ### Steps to Reproduce I was able to reproduce this problem fairly consistently as follows: 1. Connect Octoprint to the printer & monitor the serial interface and the Temperature plot to observe what happens 2. Use the CF6 PID function to PID the nozzle at 235C 3. Wait for the nozzle to cool to 145C (or set the temperature to 145C, to let it stabilize there.) 4. Use the CF6 esteps function to run a calibration extrusion at 235C. 5. The printer recognizes and reports on the serial interface that the target temperature is 235 6. The printer stops short of 235 when heating, instead cooling again around 230C 7. The printer then cycles around approx 225 +/-5 degrees, never trying to achieve 235, as seen in the attached logs. 8. If left long enough (sorry, did not time it), the printer throws a Heating Failed alert and kills the process. ### Version of Marlin Firmware Latest Bugfix2.0 merged into Community FIrmware Release 6.1 Pre 2 on 18 April 2021 ### Printer model Creality CR6-SE ### Electronics BTT SKR CR6 motherboard, stock hotend, stock cooling fans, stock TFT. Users with Creality 4.5.3 boards also report this issue. ### Add-ons None ### Your Slicer Cura ### Host Software OctoPrint

Have you done a PID Tune using the auto-tune? 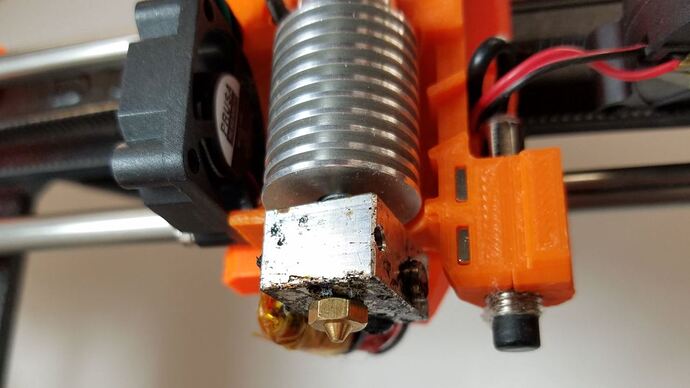 Looking to auto-tune the PID settings on your printer to improve print quality? Learn how 3D printer PID tuning works!

I have used the Auto-tune control via the printer interface but not through a computer. I’ve been playing around with manually adjusting values all night and I’ve got it to consistently heat up now but the temp bounces around too much so I’m still tweaking.

I was reading about MPCTEMP on marlinfw earlier and it sounds way more accurate.

I have used the Auto-tune control via the printer interface but not through a computer.

That should be the same. Just for a sanity check, I’d double check the connection between the heatblock and the thermistor, and the thermistor cable going to the mainboard - make sure something hasn’t come loose.

It’d be annoying if it was something so simple…

I checked that last night on the connections, all good there. Any chance of increasing the PID tune cycles to 10 instead of 5?

Sorry for the late reply…

This is normally done via the GCode command - you can set the cycle count to any number you wish.

This thread did jog a memory though - if you don’t have the silicon sock fitted to the heat block, this can be a common problem. The sock is to prevent excessive heatloss via the part fan as it blows on the block.